Analysis shows the plan results in only a 14% reduction in CO2 emissions from current levels by 2050 under optimistic conditions.

A group of Republican United States Senators has proposed a climate action plan (covered in the press here) that aims to reduce global CO2 emissions 40% by 2050. Analysis with the En-ROADS climate simulator, developed by Climate Interactive and MIT Sloan, shows that global adoption of the proposed policies under very optimistic conditions would reduce global carbon dioxide emissions by only 14%, less than half of their stated goal. This would enable devastating and costly impacts like sea level rise, increased frequency of extreme weather events, and reduced crop yields worldwide. The plan was announced by United States Republican Senators Dan Sullivan (R-AK), Kevin Cramer (R-ND), and Cynthia Lummis (R-WY) in November 2021, alongside Senators Ted Cruz (R-TX), John Kennedy (R-LA), and Rob Portman (R-OH).

The aim of their plan, which falls short of the internationally agreed goals of the Paris Agreement, is to reduce CO2 emissions 40% by 2050 compared to today. Our analysis shows that only a 14% reduction in CO2 from current levels could be achieved by 2050 with an optimistic interpretation of the global adoption of the actions outlined in the Senators’ plan. This would result in a temperature increase of 3.1°C (5.6°F). This is assuming that breakthroughs occur in technologies the Senators are betting on heavily, like carbon capture and storage, and that the scale-up of actions does not encounter any delays worldwide. Economic feasibility was not assessed as part of this analysis.

To accelerate emissions reductions, the Senators propose a suite of actions with the centerpiece focused on the expansion of natural gas use, as well as nuclear energy and carbon capture and storage. Natural gas, a type of fossil fuel, is a significant contributor to greenhouse gas emissions.

We tested the Senators’ plan in the En-ROADS global climate policy simulator using optimistic assumptions about their success to create a scenario where the world follows the proposed actions. Even with generous assumptions about the successes of the proposed policy actions, the steps outlined in the plan did not add up to a path that met the plan’s emission reductions goal, let alone what is needed to avoid severe climate impacts.

Parts of the plan from United States Republican Senators that formed the En-ROADS scenario for this analysis include:

What follows is an explanation of the impacts that these actions have on reducing CO2 emissions when put together in a scenario with the En-ROADS simulator. All results are global, and the simulator models what would happen if these actions were adopted worldwide, a decidedly optimistic scenario. If you disagree with our interpretation of the plan, feel free to edit the scenario below and share it accordingly.

1. Natural Gas – Lower costs and expanded use of natural gas along with breakthroughs in carbon capture and storage technologies (Sections I.A., I.D., and III.A.)

In this scenario, natural gas demand remains similar to the Baseline Scenario (a path of no significant additional climate action from today) in the coming decades. Demand increases faster beyond 2035, however, as natural gas carbon capture and storage (CCS) technologies scale up. Natural gas is a source of CO2 emissions when burned. In order to be able to meet energy demand and not contribute significantly to carbon dioxide emissions, it would require successes in CCS that have so far eluded developers.

Natural gas is composed mostly of methane, a harmful greenhouse gas. Drilling and transport of natural gas leads to methane leakage to the atmosphere. The plan mentions a desire to expedite environmental permitting for all projects (Section IV), which is one of the few mechanisms in the United States available to limit methane leakage and other impacts that are concerns for the communities in close proximity to natural gas drilling, transmission, and use. 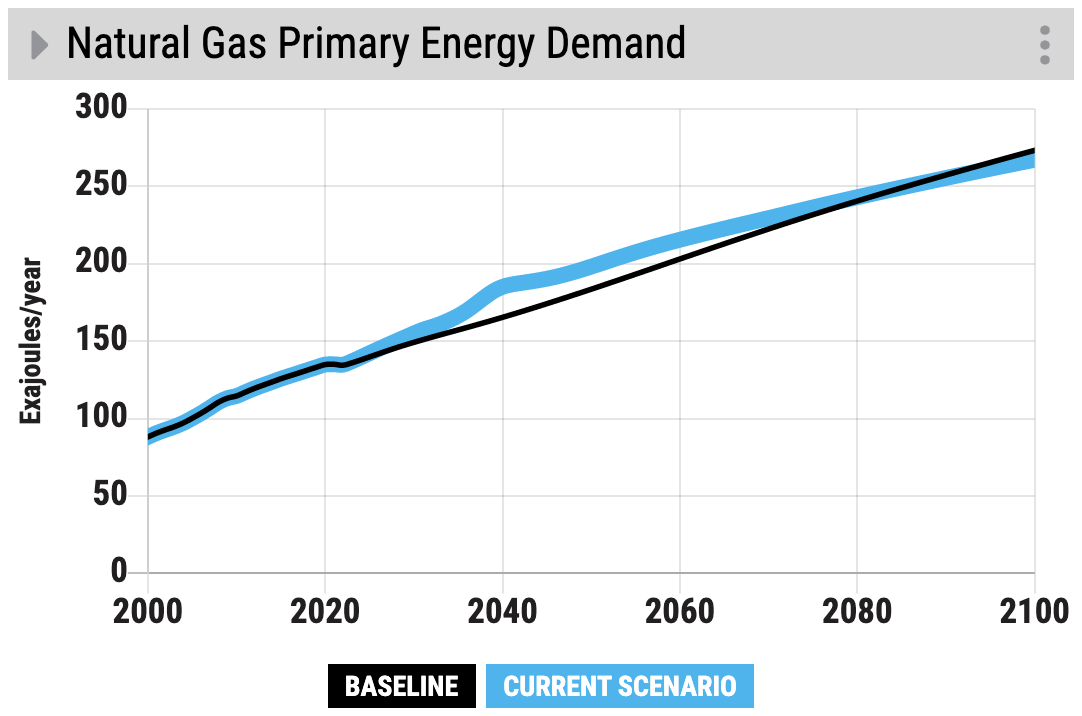 Substantial reductions in the cost of nuclear energy and technological developments can help it compete with other sources of energy. This could help reduce emissions a modest amount. However, it is limited in the proposed plan because other energy sources that produce CO2, such as natural gas, would crowd out the expansion of nuclear power. A second challenge for nuclear displacing fuels is that without electrification, or some other switch in fuel like hydrogen, nuclear is not able to power machinery such as vehicles and furnaces that don’t run on electricity. A third dynamic, which can occur with any cheap energy source, is that demand increases because of the availability of inexpensive energy (in this case nuclear). Because the new demand needs to be met, less of the nuclear energy is available to replace other types of carbon-intensive energy.

In spite of these limitations, the scenario results in nuclear power production that far exceeds the International Atomic Energy Agency’s high-end estimate of nuclear growth. Like other aspects of this scenario, it represents a very optimistic outlook that would be challenging to realize even under ideal conditions of global cooperation, not to mention the international security and siting concerns that many would have. 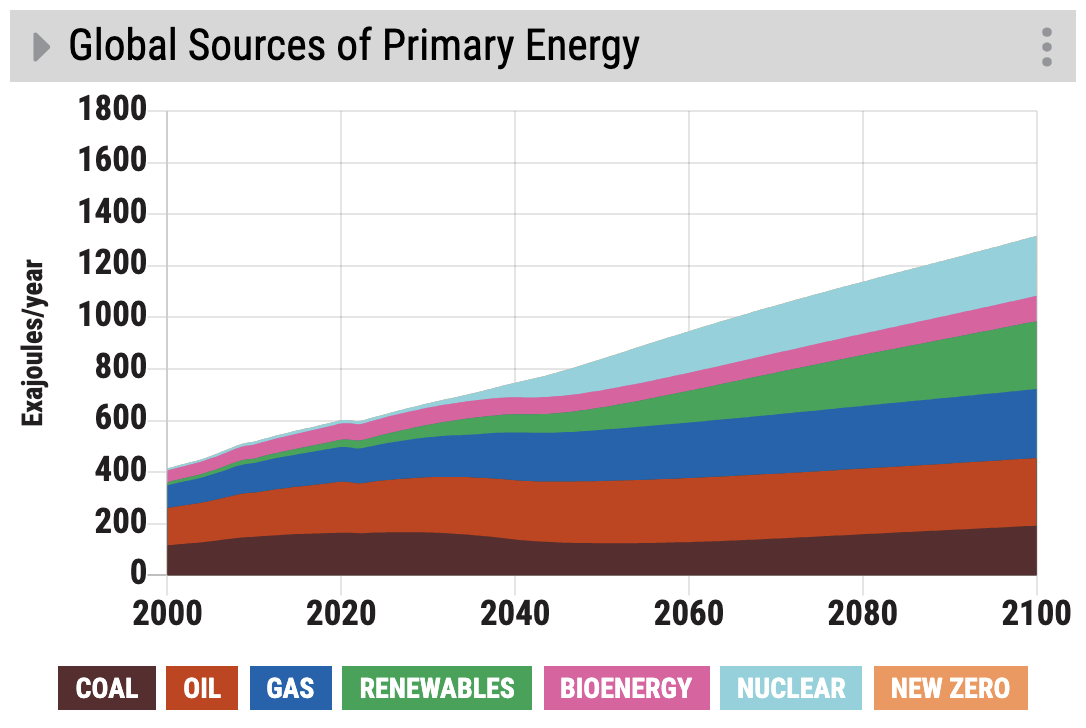 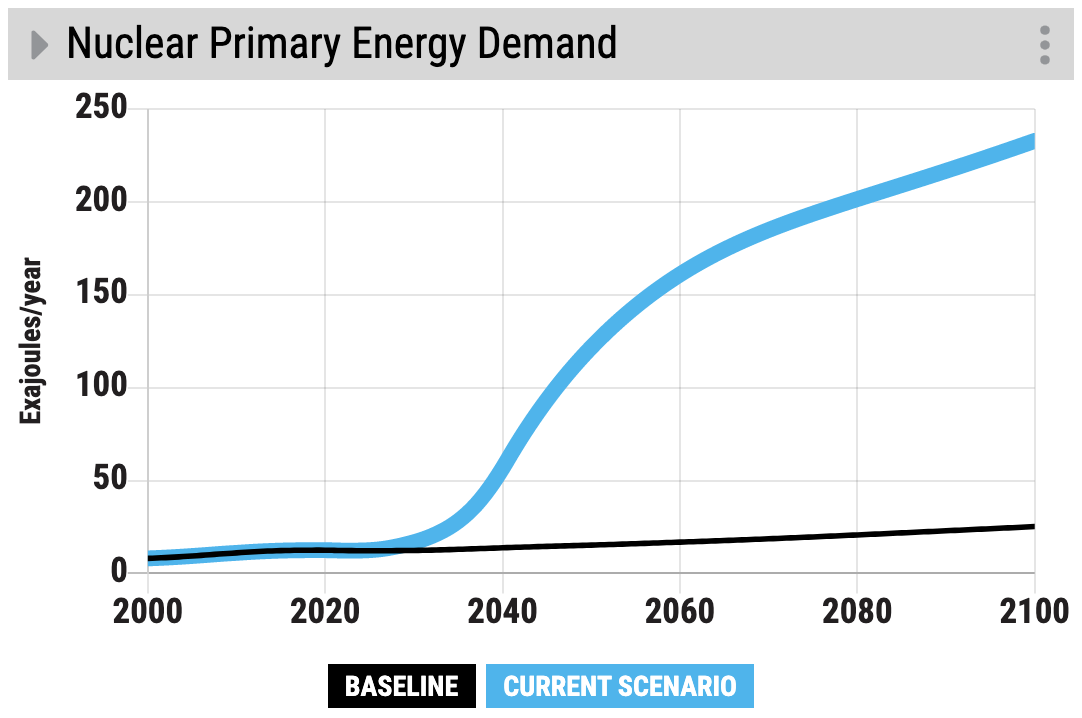 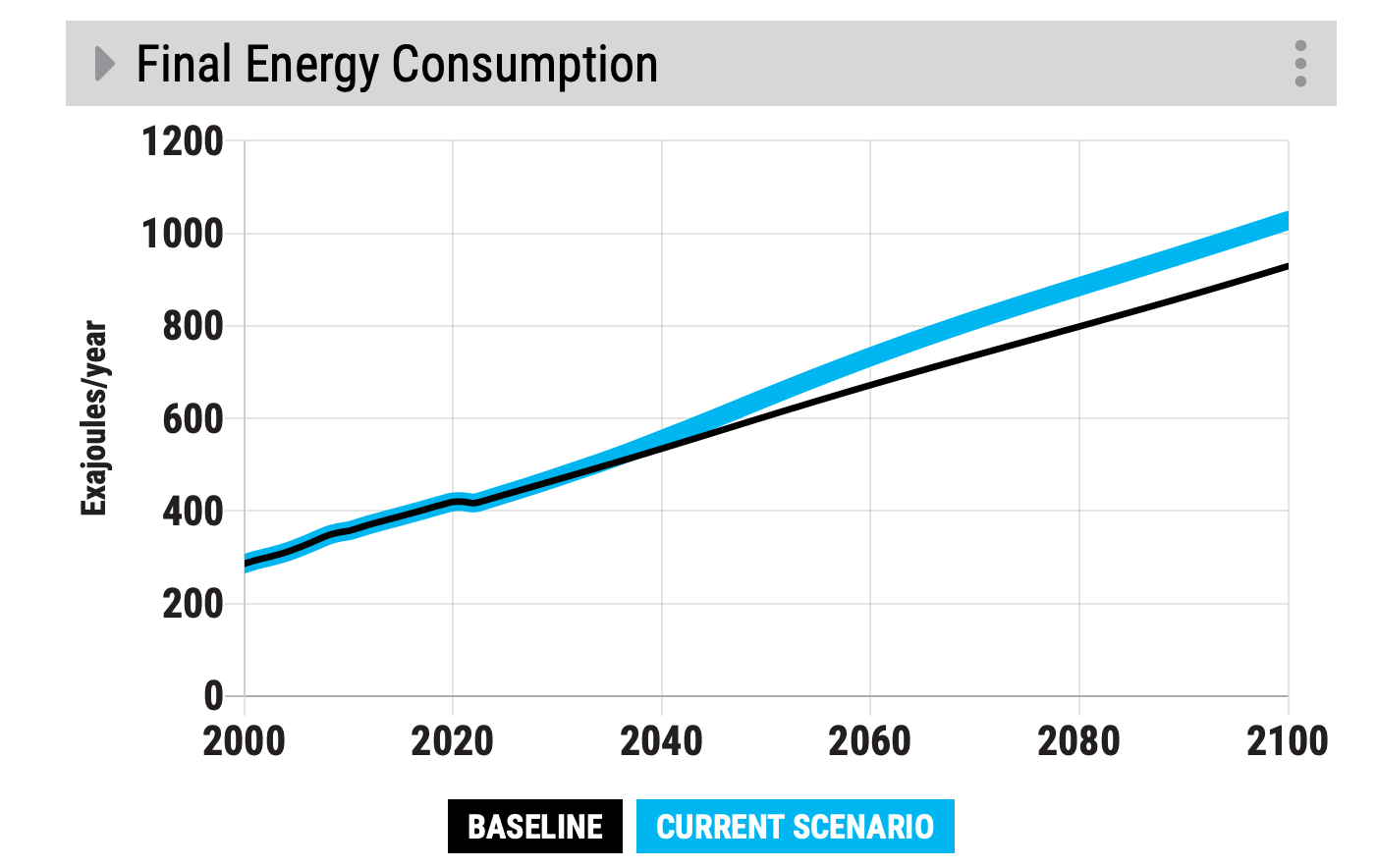 In this scenario, despite additional efforts to expand wind, solar, and energy storage technologies, the proposed plan results in a lower growth in renewable energy than in the Baseline scenario of En-ROADS, where no further action is assumed. This is mostly because renewable energy sources are being crowded out by other competing energy sources such as nuclear and natural gas in this scenario. Wind and solar have benefitted from significant cost reductions in recent years, and those gains will only result in modest continued growth if policies were to be put in place favoring continued natural gas production and increased nuclear energy.

4. Carbon removal – Big successes in the expansion of agricultural soil carbon sequestration and afforestation to remove carbon from the atmosphere (Section I.E.)

In contrast with other types of carbon removal technologies that have yet to be proven to work at large scales, agricultural soil carbon sequestration can be implemented by the adoption of healthy land management practices that increase the carbon content of soil. Moreover, expanding afforestation can also help with removing carbon dioxide from the atmosphere, although the amount of land required and who has access to it need to be taken into account. This scenario would require 300 million hectares globally of land for tree planting and almost 200 million hectares of agricultural land where strong agricultural soil carbon storage practices are in use (to put this in perspective, the area of India is about 300 million hectares). These actions would result in a maximum amount of 6.4 gigatons of carbon dioxide being removed from the atmosphere per year, in contrast to the average of 40 gigatons of CO2 that would be released each year in this scenario. Trees also take time to plant and grow, another factor which helps explain the relatively small contribution of this policy. In a scenario like this with continued use of natural gas, oil, and coal, there is a limited ability for carbon removal to offset the large levels of continued emissions from the energy sector. 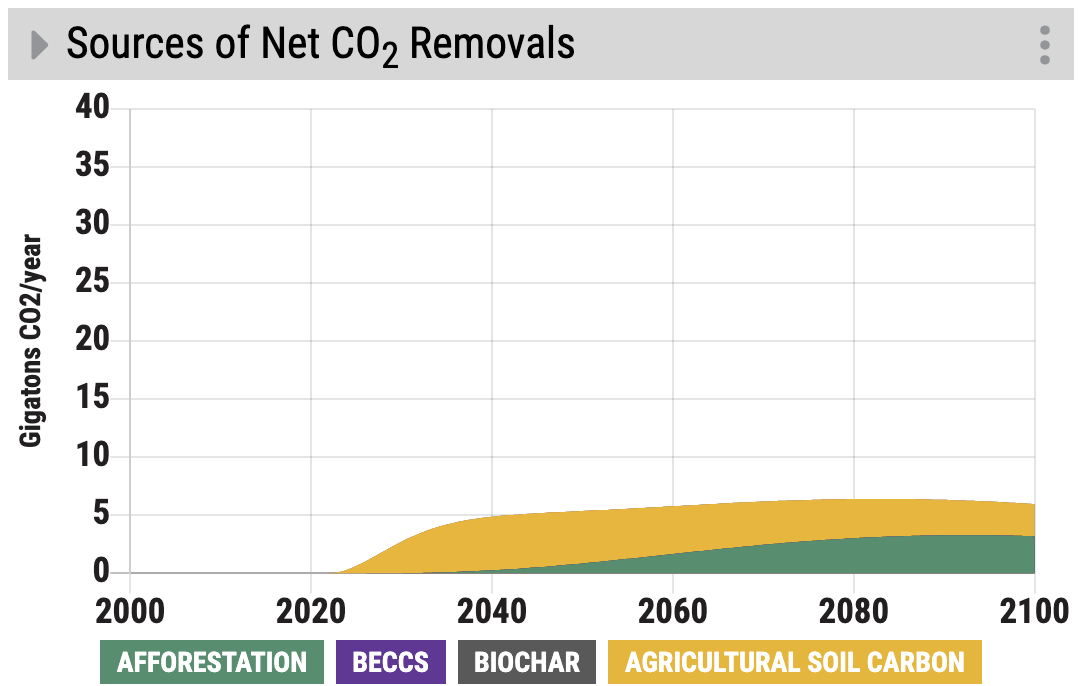 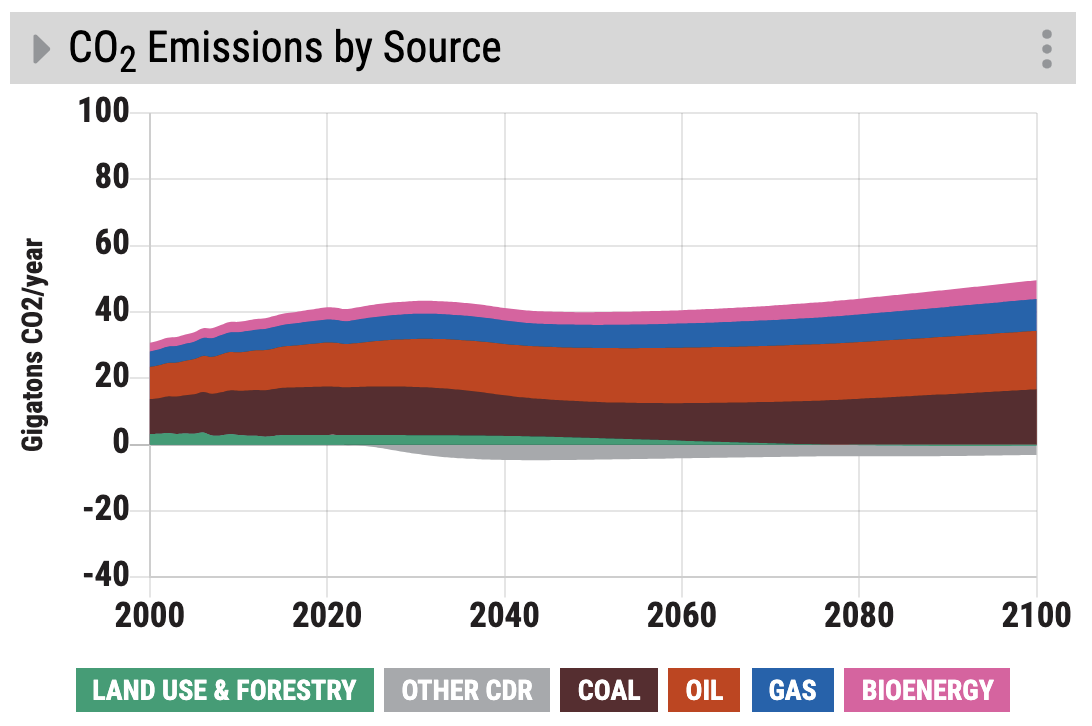 5. Methane & Other – Remediation of abandoned wells and mines (Section III.F.)

Abandoned coal mines and orphaned oil and gas wells can be a source of methane emissions, a potent greenhouse gas. An effort to remediate these sites can improve environmental and safety issues around them, while reducing methane emissions.

The result of this scenario exercise would put the world on course for reducing only 14% of global net CO2 emissions by 2050 from current levels. According to the Intergovernmental Panel on Climate Change, the world must reduce carbon emissions to net zero by 2050 in order to avoid the worst climate impacts. Countries around the world have made commitments that chart a path to similar levels of ambition, contrasting sharply with the proposal evaluated here.

This analysis found that the actions proposed would in some cases inhibit emissions reductions rather than promote them. The placement of natural gas at the center of a plan was the most prominent example.

There are three key opportunities to reduce emissions that the plan could be expanded to cover. This includes:

En-ROADS was built by Climate Interactive, a nonpartisan think tank, and the MIT Sloan School of Management. En-ROADS is freely available and has been used widely in work with audiences from Fortune 500 companies to senior elected officials.