CI used our system dynamics models, C-ROADS and En-ROADS, to analyze the climate proposals (mainly run by Senior Modeler Lori Siegel), run interactive workshops, and try to keep the policymakers and negotiators honest about what they are and are not accomplishing in here at COP21. We also ran World Climate on Friday to a packed room, and last week we delivered the role play simulation six times at the Conference of Youth with young people from around the world. We just passed our goal of reaching 10,000 people with World Climate by the end of COP21.

Climate Interactive in the news post-COP21:

What it will take to reach 2°C in the Washington Post: With ratcheting pledges, the Paris Agreement could keep global warming below 2°C, but it will require countries to improve carbon cutting efforts. “The United States, for instance, would have to progress from its pledge of reducing emissions 26 percent to 28 percent below 2005 levels by 2025, to a pledge to cut them 45 percent

The implications of the Paris Agreement on WGBH: A television interview with Dr. John Sterman. The climate deal that came out of COP21 is a major step forward, but does not go far enough. John Sterman: “If you want to be a glass half empty person, you’ve got evidence for that. But on the other hand, it’s the best agreement we’ve ever had, and it creates pressure on nations with the five-year review process to come back with stronger pledges by 2018 and really begin to cut emissions.”

The numbers on COP21 in Huffington Post: Historic emissions matter. “Since 1870, the U.S. is responsible for 18 percent of the world’s carbon pollution, compared to 13 percent for China.”

Climate Interactive in the news during COP21:

The disconnect between rhetoric and reality in US News & World Report: The goal of the Paris climate agreement to keep warming below 2°C, and to 1.5°C if possible, does not jibe with the actual emissions reductions pledged in the agreement. Andrew Jones: “It’s

kind of like this: My friends and I have committed to losing 300 pounds but are failing so far. Instead of eating less and exercising more, I propose that we lose 350.”

On tracking national climate commitments in Yale Climate Connections: A radio interview with Andrew Jones. Climate Interactive’s Climate Scoreboard keeps users up-to-date and engaged in the climate negotiations. “It’s not going to be easy to reach our goals of stabilizing the climate. It is going to be worth it.”

The role of cities in mitigating climate change in KALW: Cities around the world are joining coalitions and getting involved in combating climate change. Beth Sawin: “Because [climate] issues touch on so many sectors, I see entry points almost everywhere…if your connection is asthma and children’s health, then you can ask really hard questions about air pollution levels in your city, because a lot of the solutions to air pollution are also the solutions to climate change.”

Adding up the climate pledges in the New York Times: Think tanks disagree on th

e most likely temperature consequence of the Paris deal, but agree that the current pledges are inadequate. John Sterman: “It is dangerous for our leaders to count on emissions cuts that have not been pledged as if they will somehow occur automatically when those cuts require tough negotiations, greater funding and technology transfer for developing nations, and big changes in public opinion.”

What it takes to reach 2°C in Vox: A climate deal in Paris may not immediately limit warming to 2°C, but would introduce verification measures and a review process to make future pledges stronger. “Could future ratcheting and subsequent, increasingly ambitious global agreements keep us below 2°C? In theory, sure. But it would require a big ratchet.”

The role of developing countries in the Associated Press: While developed countries are responsible for the majority of past emissions, global warming can’t be managed without cuts from developing countries. Ellie Johnston: “Under a scenario where emissions continue at the current pace, most of the pollution growth comes from the anticipated increase in fossil fuel use by developing nations.”

The role of cities in the New York Times: Cities pledge to reduce greenhouse gas emissions, but are not enough to keep warming below 2°C. Drew Jones: “Commitments from cities should not be measured as additional to the INDCs pledged here in Paris, but they are essential to their implementation.”

The attainability of limiting warming in US News & World Report: The World Climate simulation played at COP21 led to an agreement among participants to limit warming to 2°C. Drew Jones: “The program shows that ‘a 2 degree future is technically possible. Perhaps not politically and socially accessible today, but possible.'” A video on the simulation was produced by the Associated Press and has been picked up by 27 broadcasters. 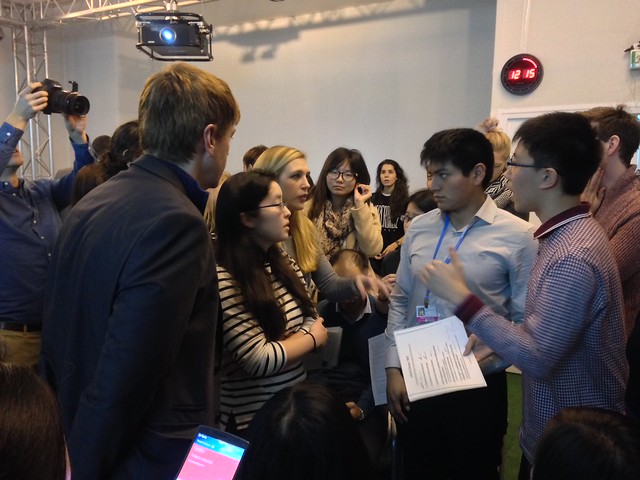 Staying below 2.0°C in Slate: After 21 years of climate negotiations, nations are hammering out an ambitious climate agreement. “The global economy would likely avoid climate disaster if the delegates embrace a so-called ‘ratchet mechanism’ that would commit countries to a series of ever-tightening five-year carbon-cutting targets.”

The 2.0°C vs 1.5°C temperature limits in the Associated Press: How fast emissions would need to fall to reach the two goals. Drew Jones: “It’s like driving from New York City to San Francisco, arguing about where you are going to park when you get there when you are still only on the East Coast.”

And over the previous weeks:

The result of the national climate pledges in the New York Times: The pledges would reduce global warming to 6.3 degrees Fahrenheit, down from an expected 8.1 degrees Fahrenheit.  John Sterman: “The pledges countries have made ‘are a big step forward, but not sufficient — not even close.'” This analysis from September 2015 was also published in over 500 other media outlets.

The implications of the Paris climate talks in Science Magazine: Almost all nations have pledged to cut emissions, but the pledges will not keep the world below 2°C. “The Paris pledges alone won’t keep planetary warming by 2100 below the 2°C ceiling that many consider safe.”

National responsibilities for combating climate change in NPR: The UN climate negotiations are like splitting a bar tab and making sure all the contributions add up. Drew Jones: “It’s like all these countries have been at the bar drinking for the afternoon, or for the day, or just showed up recently. And some people showed up in the morning, and some people just showed up 10 minutes earlier. And then the bill comes.”

The potential of the Paris climate pledges in the New York Times: An infographic showing the temperature changes resulting from the pledged reductions. “Taken together, the pledges are the biggest cut ever achieved, but are still not enough.”

Reasons for optimism about climate change in the MIT Sloan School Newsroom: Everyone must contribute to reduce global warming. John Sterman: “Science is no longer the bottleneck. The challenge is political and social.”